A Fable Agreed Upon, part 2 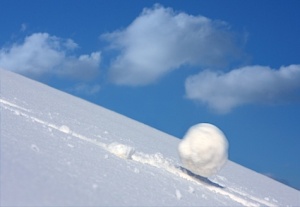 Solon J. Buck’s mistake went uncorrected. At the outset, it wasn’t influential. The Bulletin was read by MHS members and collected by libraries. But I doubt anyone lost sleep over an annotation error.

Indeed, without any correction, there wasn’t any error, was there? Members then, as now, likely vested some trust in Minnesota Historical Society products and publications.

William Watts Folwell thought so. That’s why he spent the best years of his retirement researching and writing his four-volume A History of Minnesota, as a gift to the people of the state, published and distributed by the Minnesota Historical Society (MHS). Folwell took no royalties; he waived them to benefit MHS.

Dr. Solon Justice Buck (1884-1962) about 1941, in his official portrait as Second Archivist of the United States. Buck was Superintendent of the Minnesota Historical Society 1914-1931 and the editor of Folwell’s A History of Minnesota. Buck was lauded in an obituary: “He was a perfectionist with an infinite mastery of detail. He held all his associates to his own high standards of perfection. He was merciless on incompetents, but held the respect of those who worked with him.”

It is no coincidence that Buck, who misinterpreted the John P. Williamson letter, similarly annotated Folwell’s comparatively moderate opinion of Thomas J. Galbraith.

In his manuscript for the second volume of A History of Minnesota, after lamenting the politically-forced retirement of J.R. Brown, Folwell wrote, “Into his place came Thomas J. Galbraith, a man of character and ability, who obtained the appointment not on account of actual qualifications for the position but because he had been a staunch Republican wheel horse in late political campaigns….”[i]

Buck allowed this paragraph to stand as Folwell had written it. But Folwell’s manuscript is missing the annotation which appears at the bottom of page 222 of the book. At this juncture, Folwell’s editor inserted an excerpt from notes Thomas Hughes had made from an interview with Martin J. Severance. Hughes recalled that Severance had said that Galbraith, “was a red-headed man and was a hard drinker. His excessive use of liquor had brought about a serious impairment of his mental faculties and he was wholly unfit to manage a turbulent lot of savages…”[ii]

Ever since, this footnote has been credited to Folwell as the book’s author. In fact, it appears to have been the commentary of Solon J. Buck. The Severance allegations Hughes repeated are so sensational that ever since MHS put them in print, historians have overlooked the disparity between the moderate text and this scathing annotation.

Severance’s interview with Hughes came to the Historical Society’s attention in April 1922, when large portions of Volume 2 of A History of Minnesota were already set in type.[iii] This left editor Buck little time to investigate Severance’s credibility. But he probably felt comfortable inserting the note for several reasons:

The Severance footnote is not in the pre-galley draft Folwell approved. However, give and take between the two men on other points suggests Buck and Folwell probably discussed adding the Hughes/Severance quote. In the process, Folwell almost certainly would have raised the similarities between Severance’s story about Galbraith and the drunken incident Timothy Sheehan had alleged more than a decade before. (Sheehan’s allegations that Galbraith abused alcohol are the subject of the the third part of this post.)

The seeming concurrence of this triad of sources —Sheehan, Williamson and Severance —combined with the pressure of Volume 2’s being behind schedule may have led Buck to ignore a cardinal rule of history: check your source’s biases.

No one vetted Severance. His involvement in the scandal that, if the 1862 war had not intervened to overshadow it, would have defined Galbraith’s agency —the appointment and subsequent machinations of Severance’s friend A.C.T. Pierson as Superintendent of Schools —easily knocks Severance out of the pantheon of unbiased sources.[iv]

Most damning, what Severance told Hughes contradicted what Severance had said and done in the 1860’s. In February 1861, Severance wrote Minnesota’s Republican Senator Wilkinson demanding that Galbraith (who at the time was in a pool of contenders) be the one appointed agent.[v] In 1862, Severance advised Clark Thompson on two separate occasions to block Galbraith’s intended resignation from the Agency —strange behavior if Severance truly believed Galbraith was unstable, inebriate,  and wholly unfit.[vi]

It is impossible to overstate the effect the Minnesota Historical Society’s two-part mistake —not checking Severance’s reliability and misinterpreting the Williamson letter —has had on historical interpretations of Galbraith’s character. Had Galbraith been mild-mannered, a-political, strongly religious and a teetotaler, historians would find no grist for the rumor mill. But Galbraith was not. He was strong-minded, political, bombastic, moody, a Freemason, and like most in his day, probably drank sometimes.

[i] Folwell, A History of Minnesota Vol. 2, p. 221-222. Holograph manuscripts are in the Minnesota Historical Society Institutional Archives.

[iii] A letter from Hughes to Folwell in the Hughes Papers indicates that Hughes loaned Folwell historical notes shortly before April 22, 1922. The copy of the Severance manuscript in Folwell’s files indicates an MHS secretary typed it from the original on April 27, 1922.

[iv] Severance, a friend of Pierson, went to Galbraith to plead for clemency when Galbraith fired Pierson from his position as Superintendent of Schools. Pierson tried to bribe Thompson and Galbraith into retaining him, threatening to ruin their reputations. Severance failed to prevent Pierson’s firing. Decades later, when Hughes interviewed him, Severance made gross allegations about Galbraith’s character uncannily similar to those Pierson swore to perpetuate in revenge.

1 Response to A Fable Agreed Upon, part 2