“A Teton Version of the Santee Massacre” 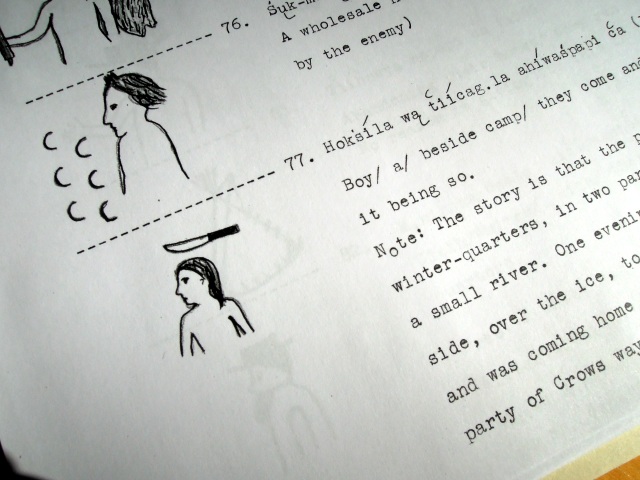 Year 77, 1862:  “Boy/ a/beside camp/ they come and scalp him/ it being so.” In the Fire Thunder Winter Count, Oglala 1786-1906, Franz Boas Papers, American Philosophical Society. Translation by Ella Deloria.

One of the more fascinating presenters I heard in Fargo at the Northern Great Plains History Conference was Dakota Goodhouse of Standing Rock, a Program Officer for the North Dakota Humanities Council. Goodhouse compared several Plains winter counts to put the U.S. Dakota War of 1862 into perspective. Only one of the winter counts Goodhouse collected commemorated 1862-63 as the year the Santees did anything.

Considering the war from a Lakota point of view reminded me of “A Teton Version of the Sioux Massacre,” a story Ella Deloria recorded, now in the Franz Boas Papers at the American Philosophical Society in Philadelphia.

Deloria introduces the piece simply, “The Teton who related this for me to record obtained this from the Santees; I do not check the historical accuracy as to the dates of treaties etc., I merely record his language for the sake of the text.”

Even if Deloria collected the story as an exercise in comparative linguistics, it is a fascinating glimpse into the Dakota War of 1862 as seen from a relatively unmediated Native perspective. For that reason, I’m not supplying any annotations, simply Deloria’s free translation, reproducing the numbers that correspond to the same lines in her literal translation, and in the Teton original.

“1. In the Treaty of 1851 it was stipulated that every man, woman, and child should receive twenty dollars in gold every year.

2. And then in the Treaty of 1858, there was added the requirement that all the men should cut their hair short, adopt “citizen’s dress,” farm, and live in houses like those of white men and in every particular to learn the ways of white men.

3. Among the Santee chiefs there were two who objected strenuously to these several requirements. One was Little Crow, and the other was the well-known Sakpe (Six.)

4. It is said that these two declared as follows: “Whoever it is who first cuts his hair shall be soldier-killed by the camp police.” But at least that threat was not carried out.

5. The gold was distributed regularly always the first day of July. And for nine years this was well carried out, without fail that by now the people were sure of it, and expected it.

6. Once again the time came around for the payment, so the tribe which had been out hunting came back into the agency and camped; but the agent told them, in a meeting he called with the people:

7. “The gold has not yet come; so go out again on a hunting trip, and after two weeks come back here.”

8. They obeyed him and returned some time in the middle of July, but again he told them to go out; so once more they went, returning around August first.

9. He told them to go a third time. But by now they were displeased. They stayed in camp and had meetings nightly.

10. Meantime some people at Yellow Medicine Agency, (thirty miles away) had broken into the store-house and helped themselves to food. When this news reached people at Redwood Agency, the displeasure grew greater as to their plight.

11. They grew more and more enraged, and in their deliberations, public utterances to the effect that they fight the whites began to be heard.

12. During these days, two young men went off into “The Big Wood” to hunt deer. Having only meager luck, they finally grew hungry.

13. Only here and there, and far apart there were now beginning to be white men’s farms, so they went to one to ask for food.

14. Only the woman was in the house, so they asked her, but she angrily answered them, and ordered them out of the house; whereupon one of the young men derided his companion, saying, “There, after all of the manhood of which you boasted in the past, you have just been pushed out of the house ignominiously, by a woman!”

15. “Certainly I have so boasted!” and he turned his gun upon her and shot her dead. Her husband who was in the stable now came running, having heard the report.

16. When the young men saw him coming, the other now said to him who had caused him to shoot, “There, now, it is your turn, if you too are a man!” so the man now shot down the husband.

17. Then when it was too late they realized the enormity of their act, and agreed they must go home and report it correctly and in detail.

18. They  traveled night and day and got in about midnight, but the people were still in meeting, so they stopped and told all.

19. “We have done a horrible thing, so it is all right to turn us over to the agent for punishment ” they said.

20. But instead Little Crow and Six both sprang to their feet exclaiming, “It is foreordained; these two young men have blazed the trail for us already. Tomorrow we shall kill the store-keepers and help ourselves to the contents of the stores.”

21. Some mature men among them disagreed with the plan, and showed it by their utterances, but no heed was paid by them, and so the assembly disbanded.

22. Very early the next morning they raided three stores and killed such whites as they found there, and took the wares of their stores, and divided it among themselves, by grabbing each for himself. Meanwhile some hurried the the agency which was nearby and also killed the whites there.

23. Others crossed the Minnesota River and went from farm-house to farm-house, killing the men, and taking the women captive, and also they killed many children.

24. This is so, for when they finally got together and were traveling westward, there was no white child with them.

25. Next day, from the fort thirty soldiers and an officer, and an interpreter, making thirty-two men in all were coming to investigate the affair, but before they landed, they were all killed midstream, including the interpreter.

26. Also the Indians went to Fort Ridgely and to New Ulm to fight some more, but that is another story. Also to the Yellow-medicine Agency.

27. Several days after these events, they were now traveling, camping on the way, westward. They would camp and then three or four days they would move on.

28. At a place named Hazel Creek (?) they were camped when it was reported to them that the soldiers were coming to bury their dead, so the men went back to fight them, but nothing came of that.

29. Again when the soldiers caught up with them at Wood-lake they went to fight them, but were badly beaten, so they retreated and returned to camp, and those who were hostile to the whites folded their tents before morning, and continued their westward flight.

30. Before this those who were friendly to the whites remained behind, camping in the form of a circle; and they took the captives from the hostiles and kept them there.

31. On the other side of the ridge were the hostiles in camp, the ones who went to Wood-lake to fight, and had decamped in the night and gone away.

32. Next day as the sun was low in the sky General Sibley and his soldiers arrived. This place was therefore called Camp Release.”

This entry was posted in Primary Sources. Bookmark the permalink.