In Which Real Indians Are Captive to Dime Hero Wanna-bes 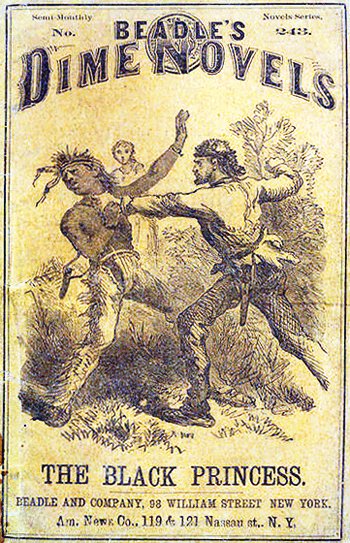 Oecetiduta commented on my post, Yellow-back Gold: “Too bad the stories of  ‘Indians’ being held captive are not shared, too.”

That is precisely why historians of the western Indian wars need to pay attention to the pop-culture of the 19th century. We have written and spoken and hypothesized about the past as if the stories of eye-witnesses were written in splendid isolation, as if the narrators were not products of the culture in which they lived.

“Dime novels were the main source of entertainment for the common man,” Vicki Anderson explains, “giving some excitement, romance and escape, both for the city people and the rural population –the city because of the boring jobs most of them had and the rural people because they were cut off from the activities of the city. These popular books brought to attention the popular ideals of the times. Their colorful and exotic fictional characters told of the typical American values of  patriotism, individualism, frontier virtues and the belief in hard work as the road to betterment in their lives.” The Dime Novel in Children’s Literature, p. 80. (McFarland, 2005)

From the modern vantage point, it is easy for a person of non-Native heritage like me to judge dime novel characters as “colorful,” “exotic,”  and “fictional.” In fact, I’d say I find them biggoted cartoons. But I was born in 1966.

Take a moment to read a true story written by a man born in the early 1870s, who loved to read dime novels. Notice how the fiction he consumed influenced what he did in real life:

“There was a sharp crack of a rifle and another redskin bit the dust!” This is typical of the way some of the authors of our old “blood and thunders” used to start their stories.

Remember the days when we would live through the daring feats of Deadwood Dick and Buffalo Bill and the triumphs of Frank Merriwell, Frank Reade and Yankee Doodle? It wasn’t necessary to read pages of tiresome description before coming to the action. They usually started with a “bang” and interest never lagged until the end.

Many a time we have hidden one of these old thrillers in our pistol pocket, then sneaked out in the barn or some other secluded spot to become absorbed in the adventures of Diamond Dick or the outlawry of the James Boys. Some youngster would take his reading too seriously and decide to go west and kill Indians. The writer admits that he got the idea when about 14 years of age, saved up his earnings until he managed to accumulate 50c, give an older boy 35c for an old 22-cal. revolver whose trigger did not work and would fire only by working the hammer with the thumb, and invested the other 15c in a box of .22 cartridges. Then go down by the creek to practice the “quick draw.” After many attempts to get the gun out of his hip pocket without getting the hammer tangled up in his clothes and shooting at the mark until his ammunition was exhausted he decided to wait until such time as he was able to get more dependable equipment. The Indians and Bandits were saved for the time being.

This is probably one reason why our parents were so opposed to our reading these novels….”

His name was Floyd L. Beagle and that’s his auto-biographical introduction to a pamphlet called, Blood and Thunders or Dime Novels of the 80s and 90s, published around 1920.

Some will protest that nothing came of Beagle’s teen-aged role-playing. The gun was broken. He didn’t actually shoot anybody.

Not when he was 14. But consider who Beagle’s contemporaries were. Dime-novel readers his age grew up to join the army and indiscriminately massacre Lakota men, women, and children at Wounded Knee December 29, 1890.

For all we know, some of Chivington’s soldiers traded copies of Edward Sylvester Ellis dimes on the long march west to their massacre of Cheyenne and Arapaho people at Sand Creek November 29, 1864.

I transcribed some of Edward Sylvester Ellis‘s racist stereotypes of Dakota people in “The Minnesota Captive” here. Yet listen to how William Everett praised Ellis in a July 1864 article in the North American Review. While Everett dismissed most of the dime literature he read as wretched, of Ellis, he said:

“Mr. E. S. Ellis’s ‘Seth Jones’ and ‘Trail Hunters’ are good, very good. Mr. Ellis’s novels are favorites and deserve to be. He shows variety and originality in his characters; and his Indians are human beings, not fancy pieces.” (p. 308)

In the same article, Everett observed that by April 1, 1864, there were five million copies of dime books in circulation, half of them novels. He concluded his review:

“Why these works are popular is a problem quite as much for the moralist and the student of national character as for the critic. It is a satisfaction that, being so, they are without exception, so far as we can judge, unobjectionable morally, whatever fault might be found with their literary style and composition. They do not even obscurely pander to vice, or excite the passions.

And it is a striking fact to be learned from Messr.s Beadle & Co.’s account of sales, that the best books on their list are those for which there is the greatest demand….If a novel as good as those by Mr. Ellis sell twice as fast as one by an inferior author, it is for their interest to obtain the services of other writers of not less merit than he.

With such established popularity as they have obtained for their publications, a serious responsibility rests upon them. They are wielding an instrument of immense power in education and civilization. They are bound to use it, not alone with reference to their own profit, but with constant regard on its effect upon the public.” (p. 308, paragraphing added)

You’d think Ellis would have a review that prestigious framed, hanging over his desk to remind him of his moral responsibility every time he and his pen,“deliberately, in cold blood, tomahawked them all–cleft open the head of each,while the others stupefied with horror, powerless with fright, as they heard the heavy, dull, blows crash and tear through flesh and bone, awaited their turn.” (“Mrs. Huggins, The Minnesota Captive” 1864, p. 16)

This is race hatred sanctioned by one of the leading magazines in the United States in the 19th century. It’s exactly what made boys like Floyd Beagle want to grow up and hunt Indians.