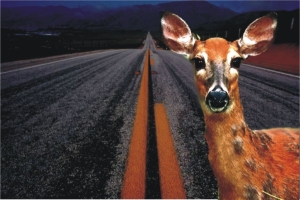 This is a post in my series honoring the 2012 Dakota Commemorative March. I’m just going to tell you a different story. It’s true.

Last night we had a dinner party at our house. Just before dessert, my husband left for a few minutes to pick up our oldest daughter from riding lessons.

The rest of us were still at the table visiting when the phone rang. It was my husband on a bad connection. On a dark country road, his car had collided with a deer. The car was so smashed it would not run. He was walking to the riding stable just up the hill to get our daughter.

He assured me he was fine, unhurt. But hearing his heart rate in his voice, my brain issued a worst-case analysis: He could be in shock. He’s hiking in the dark on a hilly back country road  where drivers do 70, to a stable at the end of a dirt road where no one is watching for him to arrive on foot.

One of our guests drove me out to the riding stable, stopping as we passed the smashed car to reassure the Community Service Officer scanning the ditch with his flashlight that the driver had walked away. We couldn’t reach him by phone, but hoped to find him up the hill and bring him back.

We drove on to the stable where we found my husband on his cell phone calmly filing an insurance report.

Our daughter, smelling like she had just stepped out of a barn, was horse-high and chatty when we returned to the crash scene and began filing the police report. She hadn’t heard her daddy’s voice in the minutes following the accident. His adrenaline rush had passed by the time she finished putting up Dyna and stepped out of the barn into our story.

The novelty of the police lights strobing in the dark, the smashed car, struck her brain (bathed in horse-induced happy-hormones) as an Instagram moment. She began snapping photos and lamented she didn’t have Wi-Fi. The only trauma she experienced was realizing the car she had imagined driving in four years might not be around.

It is a truism about trauma: each person involved in a traumatic event experiences it from a unique perspective. Therefore each person remembers it differently.

150 years from now, a historian might find the fragments of this story I’ve told here, my husband’s report as recorded by the insurance adjuster, and the story my daughter writes for English class next week.

This future historian considers herself fortunate to unearth three primary sources on the same obscure incident and sets about triangulating the stories to find out what really happened.

But the stories don’t agree in tone or on details. The historian carefully considers this. She concludes the husband and the wife were traumatized; they are not impartial eyewitnesses. But the daughter arrived on the scene immediately afterward; her account  is the most objective.

The historian privileges the daughter’s account and, 150 years from now, publishes the story of what happened last night. It is a triumphal, all’s-well-that-ends-well tale: “The Deer That Got Me A Better Car When I Turn Sixteen.”

Ignorant of our personal history, the historian’s story misses the accident’s real impact on my husband and me –the reasons why our narratives of the same story are so different from our daughter’s.

The historian hears from some of our descendants that she reported some details correctly but failed to capture the bigger-picture story passed down in our family.

The historian pouts a little. She worked so hard to dig out those old reports; she was trying so hard to tell a true story! She remembers what it was like to be sixteen and want a red transporter; she felt genuine empathy for the daughter and wanted to help her readers identify with a teen who lived in the days people drove cars.

Our descendants shrug. They tried. It’s not their job to make the historian feel good about her research. It’s their job to carry the story my husband and I told them to remember. Even if that means they continue to transport the long way, detouring around the stretch of road where my husband collided with the deer.