History Is a Fun House Mirror

Before I began writing history, I loved reading it: the feeling that a good history book was a window I could look through to see the past.

But actually doing history is more like looking into a fun house mirror: 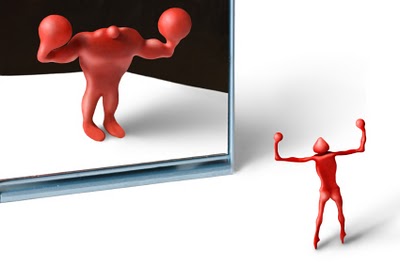 It’s a historian’s job to look at the inflated  red guy in the mirror (a story), and from that, deduce what the small red stick figure (the real thing) looked like.

But the mirror in the first graphic is flat, not curved.  Without the stick man for comparison, there are no tell-tales that this mirror is not accurately reflecting a McDonalds Happy Meal super-hero action figurine.

This analogy was stirred up by a coincidence: reading a befuddling number of variations of Justina Krieger’s story (I presented three of them here) a few hours after I arrived home from a conversation at a historical society that ended like this:

“….The story you published contains factual errors. Like the man you have named as his father was actually his uncle. His father’s name was _______.”

“I will check that,” the author sincerely replied. “But everything I wrote comes from published sources. In fact I cited them.”

The story of the Dakota war of 1862 is shot-through with that very problem. Way more than Mary Schwandt’s petticoat (above).

It is more like the blanket Justina Kriegher was wrapped in during the battle of Birch Coulie. Unfortunately this miraculous blanket has not survived. Bryant claimed Justina testified under oath that her blanket sustained two hundred holes while her body only received five scratches from the same bullets.

Could it be that German immigrants on the Minnesota frontier were spinning and weaving Kevlar fiber by 1862, but that knowledge was lost in the war and only rediscovered by DuPont scientists in 1965?

Imagine: For the next 150 years, historians faithfully describe the image they see. Historian B observes that Historian A placed great emphasis on the figure’s small head size. So, striving for originality, Historian B calls attention to the formidable fists. Historian C points out the challenge of balancing so powerful an upper body on such undersized hips.

Picking up the suggestion that Action Hero achieved great notoriety despite these well-documented challenges, Historian D researches and describes the difficulty of ambulating with this upper body muscle mass on his right clubbed foot. Because Historian D is alive and working in the Internet age, his theory goes viral and generates lively debate in which Historian E points out that, given that Action Hero is only known via a mirror image, the now-famous “right clubbed foot” was actually a left clubbed foot.

Historian E is nominated for a Pulitzer because her “mirror image” insight revolutionizes the way we understand roles played by people like Action Hero in history. Graduate students in history everywhere scramble to apply “left is right and right is left” theory to their periods/regions of study. This results in a spate of dissertations (which become their authors’ first books) innovating on Mirror Image Theory, which is advanced at professional conferences and in history departments everywhere for the next three or four decades –until that generation of historians retires.

Politicians advance solemn declarations and advise revising laws based in their good faith understanding that real insights have been gained by re-imagining the past as a mirror image.

After 150 years of polishing the fun house-mirror story, no one living can imagine Action Hero might have been a tall, skinny guy with a proportionately sized head whose cognitive capacity would have gotten him a lot farther than his muscles did.

As to his pointed feet….Well, he could be an ancestor of Hasbro’s Barbie, or possibly, of Mikhail Baryshnikov.

Or maybe he’s simply irate, every muscle strained as he pounds on the glass box in which he is trapped, trying to get the attention of the masses who are convinced that Action Hero is an accurate reflection of him.

2 Responses to History Is a Fun House Mirror