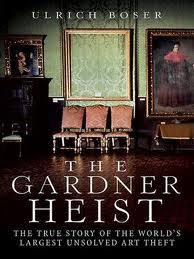 I first encountered the story of the 1990 theft of masterworks from Boston’s Isabella Stewart Gardener Museum two decades after the paintings disappeared, in the “Carrie” stack of my personal bibliophile-shopper (my mom), who flagged Ulrich Boser’s The Gardner Heist: The True Story of the World’s Largest Art Theft (Harper, 2009) as a book that might drag me out of the 19th century.

According to a March 19, 2013 article in the Boston Globe, “In a stunning twist in a case that had frustrated investigators for decades, federal law enforcement officials said today that they had identified the people who stole $500 million worth of masterworks in a daring heist from the Isabella Stewart Gardner Museum in 1990.” (full story)

I don’t remember enough of the details of Boser’s investigation to recall if his deductions matched those announced yesterday by the FBI. But I enjoyed Boser’s biographical sketch of Isabella Stewart Gardner and his reconstruction of the theft.

A 23 years-long investigation that finally yields answers is my kind of story :).

This entry was posted in Uncategorized. Bookmark the permalink.