The Stuff of Legend

The columnist who dubbed himself “The LeSueur Lyre” liked puns. Why anyone believed him is Gleek to me.

In late June 1919, Samuel J. Brown of Brown’s Valley, Minnesota mailed a newspaper clipping to Warren Upham, the Secretary of the Minnesota Historical Society. Brown scrawled at the top of the page, “We ought to get the diary.”

By “we,” Brown meant the Minnesota Historical Society. During the preceding two decades, when historian William Watts Folwell was researching and writing the first two volumes of The History of Minnesota, Samuel J. Brown, son of Sioux Agent Joseph R. Brown, an 1862 captive, and a Life Member of MHS, had risen to being the Society’s go-to fact-checker on the Dakota War. 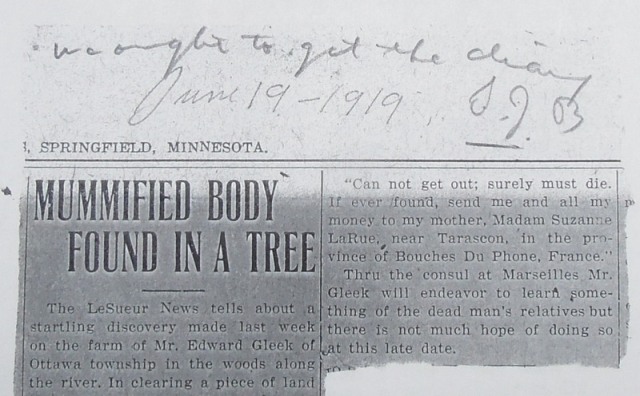 The LeSueur news tells about a startling discovery made last week on the farm of Mr. Edward Gleek of Ottawa township in the woods along the river. In clearing a piece of land it became necessary to cut down a gigantic white oak tree which broke in falling, disclosing the fact that it was hollow for a distance of about fifteen feet beginning several  feet above the ground and the cavity ending in a large opening concealed among the branches of the lower side of the tree, which leaned considerably. Within this hollow was found by the horrified choppers the mummified body of a man, not at all decayed, but dried and shriveled by the lapse of time to something rivaling the best Egyptian art. Mr. Gleek, upon being summoned by the frightened laborers, recognized at once in the mummy the body of Jean LaRue, a former servant of Mr. Gleek, who had mysteriously disappeared from the farm the 30th day of August, 1862.

On the day, which was during the Sioux Uprising, a boat load of soldiers on their way up the Minnesota River from St. Paul to New Ulm, foolishly discharged their muskets many times as they steamed up the river above Henderson, carrying terror to the hearts of people along the river who were already about to flee from the dreaded Indians. At Le Sueur one of the bullets thus discharged wounded a small boy, Cyrus McEwell, in the leg.

Mr. Gleek says that when Jean LaRue heard the firing he seemed to nearly lose his reason from fear, rushed into the house, seized his rifle and some other belongings, including about $700 in money, and fled into the woods. he must have known of this hollow tree, sought to hide there, slipped down too far, and being unable to extricate himself, must have perished there where his body preserved in living oak, failed to decay. His rifle, bullet pouch and powder horn were found by him and the money, $783.50, was found in his pocket.

Also there was found the diary which Mr. Gleek says LaRue always faithfully kept, and in it undated, but on the page following the one dated August 29, 1862, was written in trembling words the following:

“Can not get out; surely must die. If ever found, send me and all my money to my mother, Madame Suzanne LaRue, in the province of Du Phone, France.” Thru the consul at Marseilles Mr. Gleek will endeavor to learn something of the dead man’s relatives but there is not much hope of doing so at this late date.

With regard to the clipping you enclosed (the one you sent me). There was something in the papers here about it which I noticed, and I think I cut it out. On July 23 we received a letter from Dr. Quaife [Superintendent of the Wisconsin Historical Society] enclosing a similar clipping from a Wisconsin paper, and asking if we could verify it in any way. Miss Heineman and I got the LeSueur papers out and looked over both the Herald and the News and found the following editorial in the LeSueur Herald of July 2, which I copied in answering Dr. Quaife’s question.

“This office has had several calls the past week to know the truth about the remains of a man which were supposed to have been found in the hollow of an old oak tree at Ottawa. There’s nothing to it.

The trouble started in this way. For years the ‘LeSueur Lyre’ has been writing various fairy tales which have been appearing in the LeSueur paper under the proper heading. Last week he wrote an imaginary story about a man who tried to hide in a tree there during the Indian outbreak in 1863 [sic], got stuck and could not get out, his remains, a note, and some money being found when the tree was cut down. The the Mankato Free Press came along and republished the story as a real fact under a regular news heading without credit to the ‘LeSueur Lyre,’ whom everybody knows as a clever writer of ancient and modern fiction, and whose articles appear in the Herald. The Free Press ‘put one over’ on the readers.”

Does it matter? We might look at this as a case of history done right. The Lyre’s “fairy tale” about the body in the tree was, ultimately: 1.) corrected as an invention by it’s the source (the LeSueur Herald) and, 2.) recognized as fiction by historians who thought to fact-check the story.

So maybe it doesn’t matter much. As far as we know, the story ran amok in newspapers in only two states for a few weeks in the summer of 1919 before being certified as a legend. It’s major recurrence in history, quite appropriately, is an artistic reinvention in Thomas Maltman‘s first novel Night Birds (SoHo Press, 2007, p. 66-68).

But what happens when newspaper fiction flies under the radar and is elevated to the status of history? Ten years before the Lyre invention, O.W. Smith, editor of the Morton Enterprise “put one over” on history –and ultimately, on the Minnesota Historical Society. Twice.

One hundred and five years later, Smith’s fictions live on as “facts.” Those stories are coming up.