by Zabelle Stodola, University of Arkansas at Little Rock

The opening parts of Zabelle’s article are found here: Part I, and Part II

Carrie has done such a great job providing specific information about the dime novels based on Josephine Huggins’ captivity that I thought I’d try to place those comments in a wider context. In 2004, I co-authored an essay on dime novels with Colin T. Ramsey, who teaches at Appalachian State University.[i] For part 3 of my blog entry, the last in this series, I’m going to extract some general information from that article.

Literary forerunners: The first real dime novel, Malaeska: The Indian Wife of the White Hunter by Ann Sophia Stephens,did not appear until 1860, only a couple of years before the US-Dakota War broke out.[ii] But this dime novel as well as the countless dimes that followed were influenced by two earlier literary forms: pamphlet novels, which flourished in the 1830s and 1840s, and “story papers,” which appeared in the 1840s and early 1850s. Like the story papers in particular, dimes were cheaply produced and sold, were enormously popular, were marketed to the working classes (though many social strata read them), and were known for including sensational and sometimes violent content as well as stereotyped, two-dimensional characters.[iii]

Marketing: The term “dime novels” originally came from a new series the publisher Beadle and Adams called Beadle’s Dime Novels.[iv]  As a marketing ploy, Beadle and Adams prominently highlighted the low price of these books in its title. If a publisher today launched a series named Harper’s Dollar Novels, for example, it would probably sell well too and undercut competition! The early dime novels were pocket-sized—four by six inches—and formulaically ran to about 100 pages each.  Cheaply bound in paper with an instantly recognizable single-colored cover, they cost a dime, of course (later on Beadle began publishing a series called Beadle’s Half Dime Library). The original series was an overnight success with a new title coming out about every fortnight for the next fourteen years, until a new series, Beadle’s New Dime Novels, replaced it.  There were succeeding spin-off series too. As you can see from the cover of Malaeska, the early dimes used only black lettering. But soon full color covers became the norm with increasingly graphic and garish illustrations.  Eventually “dime novels” stopped being a brand name and became a generic term for any cheap, paper-covered fiction.[v] By then, many other publishers had jumped onto the dime novel bandwagon.

Content, production, and authorship: Another of Beadle’s dime novel innovations was the concept of the recurring character. The writer Edward Wheeler created the first recurring character, Deadwood Dick, who was an appealing outlaw (or sometimes detective) and an anti-hero of sorts.[vi]  In this way readers could not only expect a recognizable book on the outside but predictable material and characters on the inside.

The use of regular characters also encouraged standardized narrative situations.  Although the earliest dime novels usually displayed a variety of settings, somewhat developed characterization, and an extended conflict, as the genre evolved, dime novel  plots increasingly relied on scene after scene of violent confrontation.[vii] Dime novels were so formulaic that publishers tended to market trademark characters like Deadwood Dick rather than publicize the work of individual authors. In fact, dimes often appeared anonymously or pseudonymously and might be written by a stable of hack authors.[viii] Sometimes the same individual published under several pen names. Only a handful of writers—including Edward S. Ellis, about whom Carrie has written in previous posts—became well-known as authors of dime novels. And even they sometimes published under various pen names to increase their output. I’ve read that romance writers today also may also publish under different names. It’s easier to churn out a lot of formula fiction than other, more individualized, kinds of work, and of course both dimes and romance novels (Harlequin novels for example) are examples of formula fiction.[ix] Dime novel publishers might encourage writers to use modest amounts of innovation to keep a reader’s interest, but they basically wanted writers to conform to pre-determined guidelines.

Colin Ramsey and I end the introductory segment of our article with this paragraph, “Ultimately, then, we should see the dime novels as a significantly mass-produced form of reading matter which depended upon a set of nearly interchangeable character types and easily reproducible marketing, and which employed quasi-industrial production methods that de-emphasized individual authorship.  However, despite these facts, we should not dismiss the form as being uninteresting or assume its readers were unsophisticated.”[x] 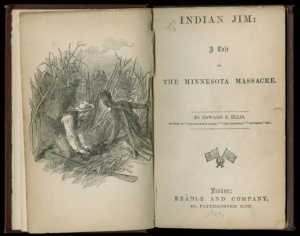 Following our general introduction in the article is a detailed examination of two dime novels using Indian captivity as a plot: Malaeska and Indian Jim. Colin wrote the section on Malaeska, but I wrote the section on Indian Jim, which is one of many dimes based on the US-Dakota War. I returned to an even more detailed analysis of this dime novel in a separate chapter devoted to it in my 2009 book The War in Words: Reading the Dakota Conflict through the Captivity Literature.[xi]

Dime novels have attracted a lot of scholarly attention in recent years especially with the availability of online resources, though piecing together accurate information is still very complicated (e.g. trying to track a title’s many reprints or identifying the real identity of pseudonymous authors).

For more information, I recommend the following references:

“Dime Novels and Penny Dreadfuls” at

Albert Johanssen. The House of Beadle and Adams and Its Dime and Nickel Novels: The

Edward LeBlanc. “A Brief History of Dime Novels: Formats and Contents.” In Pioneers,

[i] “Dime Novels.” Co-authored with Colin T. Ramsey. In A Companion to American Fiction 1780-1865, ed. Shirley Samuels. (Oxford: Blackwell, 2004), 262-73. Since we published this article, a lot more information has appeared on dime novel literature.

[ii] Cover image of the first edition of Malaeska courtesy of Google Images.

[xi] The image of Indian Jim is taken from the Newberry Library’s page on “Dime Novels” at www.newberry.org/dime-novels. The Newberry Library, an independent research library in Chicago where I have conducted a good deal of research over the years, possesses an especially large collection of early dime novels and Indian captivity narratives.