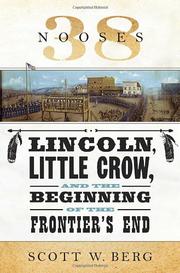 Last summer, I had the pleasure of visiting with Scott W. Berg when he was in town to visit family. I was also happy to snare him for an appearance at the Pond House on August 12, 2012, where Scott, who teaches in the MFA program at George Mason University and writes for the Washington Post, gave us an insider’s look at writing history for a popular audience.

Scott agreed to an interview with me about his new book, 38 Nooses: Lincoln, Little Crow and the beginning of the Frontier’s End, being released by Random House/Pantheon in hardcover and e-editions December 4, 2012.

An excerpt of 38 Nooses is now available on the web, along with an advance review from Kirkus. It concludes:

“Throughout the sweeping narrative, Berg skillfully weaves in various perspectives, including that of Sarah Wakefield, a woman held captive by the Dakotas, and Bishop Henry Whipple, a paternalistic advocate for the Native people. Yet Berg’s greater accomplishment is his ability to overlap the little-known Dakota War with its far better known counterpart, the American Civil War. The author’s juxtaposition offers readers a contextual framework that provides unique insight into the era. For instance, just days after the mass execution, Lincoln issued the text for the Emancipation Proclamation, prompting curious readers to wonder: How does a country see fit to condemn one group of people to death and then, less than a week later, set another group free?”

It is about time we had a well-researched, highly readable book like Berg’s to put the Dakota War of 1862 in its national context and onto the national stage. I’m looking forward to reading 38 Nooses in it’s finished form!

This entry was posted in Books, Scott W. Berg. Bookmark the permalink.