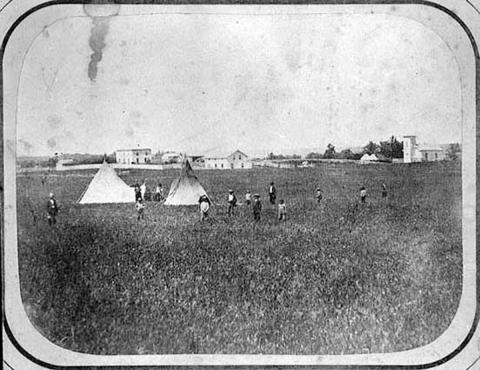 Saturday July 21, 1860, Alfred J. Hill took this photo of the Hazlewood (Hazelwood) Republic on the Upper Sioux Reservation in Minnesota. According to a letter written a few days later by one of the men in the foreground, the photographer’s vantage point was, “on the little mound back of Simon’s.”

Wahpeton Dakota Simon Anawangmani was the President of the Hazlewood Republic. He was also a leader in the war-time Dakota Peace Coalition head-quartered in the mission school boarding house, the two-story building framed by the tipis on the left side of the photo.

This entry was posted in A Thrilling Narrative, Dakota Peace Party. Bookmark the permalink.