Stories of the Dakota Peace Coalition 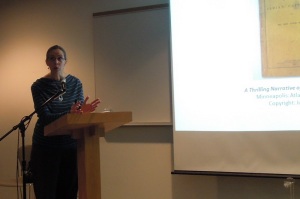 As we visited after the talk, I promised I’d post details on a couple of questions here.

Am I presenting this talk again? Yes: My next presentation of “Stories of the Dakota Peace Coalition” will be Sunday March 17 at 2:00 PM sponsored by the Pond Dakota Heritage Society in Bloomington, MN. Location TBA.

Are there any new books you recommend? Yes! Here are some very different books to choose among depending upon your interests.

Mni Sota Makoce by Gwen Westerman (who wrote the forward to the 2012 edition of A Thrilling Narrative) and Bruce White, just announced as a finalist for the Minnesota Book Award, develops in detail the material I only had time to hint at in my opening overview of Dakota people’s relationship to the land.  I mentioned how important of new translations of texts like Mazakutemani’s from the original Dakota manuscript will be to our understanding of history. Mni Sota Makoce contains a great example: Glenn Wasicuna’s translation of the Dakota version of the Treaty of 1851.

North Country: The Making of Minnesota by Mary Lethert Wingerd is a detailed and nuanced, readable story of multicultural Minnesota in the decades preceding the Dakota War of 1862, lavishly illustrated with color plates compiled by historian Kirsten Delegard. Wingerd develops the Dakota War story in the context of shifting ideas about race and culture, suggesting the war, which unfolds at the end of the book, was the end of a Minnesota we have forgotten existed.

38 Nooses: Lincoln, Little Crow, and the Beginning of the Frontier’s End by Scott Berg. I mentioned that my first exposure to the Dakota War of 1862 was via Duane Schultz’s 1993 book, Over the Earth I Come. Berg’s 38 Nooses has bumped Schultz’s book off the shelf as the scholarly-researched, compulsively readable story of 1862 for general readers.

If you are intrigued by the stories of 1862 captivity survivors, my co-editor, Zabelle Stodola’s 2009 book, The War in Words: Reading the U.S. Dakota Conflict Through the Captivity Literature is an outstanding overview of the subject, using the work of twenty narrators, 10 white and 10 Dakota, as examples. Among them, she covers the stories of two Peace Coalition leaders I profiled, Paul Mazakutemani and Lorenzo Lawrence in more detail than I had time to give them.

And of course  hope I intrigued you to read the 2012 edition of Mary Butler Renville’s A Thrilling Narrative of Indian Captivity: Dispatches from the Dakota War. The “About the Book” tab on the navigation bar at the top of this page will lead you to reviews, excerpts, and other information.

Thanks again for coming!

This entry was posted in A Thrilling Narrative, Books, Dakota Peace Party. Bookmark the permalink.