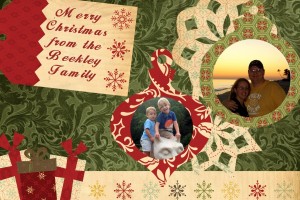 You know those photo Christmas cards than land in your mailbox every winter? The smiling third cousins posing on an ocean beach. The friend you haven’t seen since graduation who faithfully sends a visual pastiche of this year’s cute-kids-and-pets.

Do you toss these cards right away? I can’t bring myself to do it. Right away.

But if I let the pictures sit around until about this time every year, I recycle photo cards with only fleeting guilt. After all, somewhere out there, a mom or a sibling has tucked away a copy of this card as a precious memento. But my file cabinets are overflowing; I don’t have the space to be sentimental about storing things that have no intrinsic value to my family.

Then there’s the Minnesota Historical Society. Imagine you are legally designated as Minnesota’s collective historical memory,  Grandma’s Attic for the entire state.

This summer, this request came in from MHS:

“Help! A reporter is asking for that picture of Famous Person and we can’t find it in our collection.”

I tried not to laugh. MHS is trying hard to turn over the proverbial new leaf, going out of its way to try to be helpful, especially to the media. But I did laugh.

“I’m sorry,” I replied. “You will have to send that reporter to the rival newspaper. They are the only ones with a copy of that photo. You can’t find yours because you lost it in the purge.”

The Historical Society was in the same boat researchers have been in for more than a decade since MHS weeded their AV collection. Photos that were once available are now gone.

You guessed right: The newspaper ran the story without the photo of Famous Person.

I began researching at MHS in the early 1990s. A decade later I joined a research group there and discovered it was a great place to ask questions like, “I made a photocopy of this photo five years ago. Despite the MHS call number on my copy, the Library staff can’t find it. How can that be?”

The day I asked that question was the first time I heard the words “photo purge.” Someone explained what it was. Then half a dozen researchers chimed in with stories of important photos that had gone missing.

A year ago I summarized my understanding as: “[A]n event familiarly known in the research community as ‘the photo purge’ –the destruction by MHS of photos in their collection that were not originals. It seems MHS did not have the resources to first ascertain that another copy of each photo existed in another public institution; they destroyed some images for which MHS owned the only known copy.” [1]

In a note on that sentence I commented, “This is my representation of the “photo purge” from my researcher’s point of view. I am not aware that MHS has publicly advanced its institutional rationale.” [2]

I published my report to the Internet and the magic of digital connectivity kicked in. A research colleague, Bruce White, read it and emailed to say that in 2001, frustrated with his inability to locate photos lost in the purge, he had asked MHS to explain its thinking. MHS replied with an email message on the public record. Bruce sent me a copy, and with his permission, I am posting it here.

In an email addressed to Bruce White dated 11 May, 2001, Bonnie Wilson of MHS wrote the text in blue below. She copied the message to then-MHS staff members Tracey Baker, Michael Fox, and James Fogerty.

“I offer the following as the history of the weeding of the historical/documentary photo collection:

Photos removed during the changeover to the Visual Resources Database

One aspect of the photo collection that had always been troublesome was the fact that we did not have source or donor records for items in the collection that were not original to the collection.  It was assumed that materials from other repositories made their way into the collections because they had been used in MHS publication and then passed to the former AV department.  We had no clear title to these materials and sometimes no citations to their original source.  It was decided by members of the work group, including Lila Goff and Michael Fox, that the collection needed to be cleared of material whose ownership was not ours.

In the course of preparing the photo collection for the Visual Resources Database, the curator of Sound and Visual Collections and the AV Cataloger reviewed photos that had been copied from other repositories and institutions.  We removed these materials and sent them to one of several places:

1)      MHS historic site, such as Fort Snelling, if the photo related to the site

If the photo was of an artwork, it was reviewed by the art curator.  He could keep it in the “Curator’s File” of reference material if he wished.

Photos from Federal repositories or collections were sometimes discarded as they were very old and newer better copies are now available, particularly from the Library of Congress and the National Archives on-line sites.”

The process Wilson outlined sounds reasonable, doesn’t it? But what actually happened to the “weeded” photos? That isn’t clear at all. The plan only called for the return of photos to identified source institutions. You would think those photos would be easy to trace, but they are not.

And what happened to the “troublesome” photos that initiated the purge, those for which MHS, “did not have source or donor records”? MHS’s disclosure statement makes no provision for the disposition of those photos.

The story of one controversial, missing photo is the subject of the next post, Image Not Found. The series concludes with To Whose Benefit?

This entry was posted in Minnesota Historical Society. Bookmark the permalink.

2 Responses to The MHS Photo Purge