Army Officers and Dakota Women on the Minnesota Frontier, Part 2

In Part I of this series, I used a new translation of an 1861 German-language article in the New Ulm Pionier to introduce the subject of relationships between Army officers at Fort Ridgely and Dakota women on the Dakota Reservations in Minnesota. In this post, I’ll supply the text of Stephen Riggs’ April 1861 editorial, “The Duties of Fathers To Their Children.” 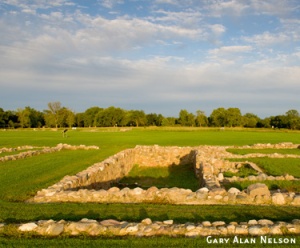 The foundations of officers’ quarters at Fort Ridgely. Photo by Gary Alan Nelson for the Minnesota DNR.

Army officers at Fort Ridgely have recently fallen on hard times as historical subjects. Walt Bachman has uncovered the story of Ridgely officers’ previously invisible enslaved servants –one of the subjects of a new interpretive display in the works for Historic Fort Ridgely. Now we’re revisiting long-known allegations that Fort officers routinely abandoned the children they fathered with Dakota women. Did every officer posted at Ridgely bring slaves to the free frontier? No. Neither did every officer enter into a sexual relationship with a Dakota woman who bore his child. But the latter was so common that it was controversial in the 19th century. Period evidence of that controversy forms the core of this series.

Today, our questions are different from those posed in the New Ulm Pionier in 1861. We recognize that traditional Dakota culture is rich and that children raised in that culture are not inherently disadvantaged –except, perhaps, as measured by some Americans. In fact, some Dakota today would argue that traditional culture is far preferred.

Instead, I wonder: What did Dakota women and their families think of these relationships? We’re the liaisons voluntary, or as Dakota oral tradition remembers, were Dakota women raped by English-speaking men in positions of power? If the relationship was voluntary, what did the woman and her family understand about the longevity of her association with an officer whose posting was routinely changed? Did those attitudes change as the Civil War approached and the length of postings at Fort Ridgely grew shorter than the gestational length of pregnancy?

One of those Dakota women has a voice in the “sermon” by missionary Stephen Riggs mentioned in the New Ulm Pionier  –although, unfortunately, only a bit part. In the lines bolded below, her words roughly translate, “My baby’s father was a doctor at the Fort. But now he is gone to the Missouri [River].”

On May 22, 1861, the St. Peter Tribune published an editorial letter by Riggs titled, “The Duty of Fathers to Their Children.”

It occurs to me that the idea of paternity is longer, and broader, and deeper, and higher, than most men suppose. Many men, both young and old, seem to think lightly of the relationship of father. And yet, in the nature of things, there can be no earthly relationship which involves more grave and weighty responsibilities than the paternal. The maternal relation may be regarded as, in some respects, taking rank of the paternal; but not in responsibilities. Indeed, in the human family, the father is bound to take care of the mother with the children.

It is not however my purpose to write a homily on the duties of fathers in general; but to urge upon those whom it may concern the performance of duties of fathers towards the children which they have scattered among the Dakotas.

In and out of the Dakota country, it is known that the process of mixing races has been going on quite rapidly. The Canadian trappers and voyagers seem to take to it quite naturally. From the commencement of this intercourse with the Indians they have appeared to be perfectly content with the position of being the father of a family of half-breed children. Not that they have always been faithful, or that they have not sometimes left one Indian woman and taken another; but in these respects they have been more loyal than the Anglo-Americans. This latter class, whether officers in the Army, Traders, Indian Agents, or government employees, have gone in to the arrangement not less naturally and readily than the Canadians, but the mischief with them is only pro tem pore. They have not intended that it should be a permanent arrangement. And the few cases wherein it has become permanent have been decided afterwards by considerations which were not contemplated in the beginning.

In this respect, some Americans act very honorably among the Dakotas. Coming into the country as young men, and engaging in business they have of course fallen into the common custom of taking Indian women. In this intention the arrangement was probably very temporary, but when they have found, in the natural course of things, a family of children growing up, they have not had it in their heart to repudiate the mother with the children. So, notwithstanding a great disparity of taste and education, they have legalized the relation and henceforth lived in the discharge of conjugal and paternal duties. I have always honored such men. It may have worked to their disadvantage, but they have done their duty. And their self-denial enured [sic] to the benefit of their children.

There is another class of men who have become fathers among the Dakotas, and have not felt their duty to continue the connection with the mothers; but who have endeavored to do their duty by their offspring. They might not perhaps bring these children of Hagar home to live with the mother of Isaac — but they have furnished the means to educate them, and thus shown that they had the feelings of a father.

A third class, and I regret to say that it is the most numerous, who have scattered children somewhat in the fashion of sewing mullien, [sic] and with no more care about their growth. Only a couple of years since, a woman died in a state of want on this Reservation. She was the wife of an Indian, the mother of several children and the daughter of an officer of rank in the army of the United States. Her father permitted her to grow up like an Indian, and to die like an Indian. How could he do it?

And even now are cases like that occurring continually. At the beginning of this past winter, a young girl, living under the hill below our mission dwellings, came every few days with a fine looking boy who had a white father. She said, “Pazhehoota wechashta at Fort — ha attayya, but he is now gone to the Missouri.” And I am informed that this was only one of quite a number of half-breed children left among the Dakotas, by the officers of those companies. Do these men ever think of a father’s obligations? Do they ever have any yearning of a father’s heart toward their own offspring? How can they bear the thought of their children growing up to be Indians, and learning to dance the scalp dance?

Let me say, “Gentlemen, you have duties to perform to these children. — Hunt them up and have them educated. Don’t be ashamed to own them. The disgraceful part of your proceed[ing] in regard to them is past — remains for you to do is honor. Don’t make your calculations that some missionary or some boarding school will hunt up your children and educate them without care or cost to you.” I should be ashamed if I were an officer in the army, with a salary of from seven hundred to as many thousand a year to have my children either grown up wild, or to be trained at the expenses of some benevolent persons. Not so should I be willing to throw off or discharge the obligation of a father.

Gentlemen, I am not your enemy. I don’t come to upbraid you for what you have done. I am sorry for you. But what I want to have you do is to act the man now. Let us see that you have a father’s heart. And I, for one, will honor you for that. And in all your efforts, truly and honestly made, to discharge your duties toward your children, my heart shall beat in sympathy with yours.

One more word I have to say to unmarried men in this country. It is a bad place for you. You know as well as I do. But what I want to say is, “Don’t keep Mistresses. If you prefer a Dakota woman, take her for good and be faithful to her. Marriage is a matter of taste. I don’t advise you to seek wives among Indians. But if that is your taste, nobody has any right to object. Only don’t be mean about it. Don’t dishonor the community; even if it is an Indian one. Don’t treasure up for yourselves wrath against the day. Of all sins, licentiousness is the most terribly ruinous of moral character and even manhood itself. — Be wise. And may God help you to shun the path of the destroyer.”

Context is everything and we cannot miss the St. Peter Tribune’s timing. It was a Republican newspaper and the Democrats’ reign in Minnesota’s Indian regime was lurching to a close. The last week of May 1861, was the last week of J.R. Brown’s tenure as Sioux Agent, and the end of the line for most of his employees. Dozens of men were faced with the decision to stay on in Indian Country in some other capacity, or to return east, leaving behind any children they may have fathered.

The nation was also one month into the Civil War, which was siphoning Regular Army regiments and their officers away from frontier forts where they had previously been stationed for 10-20 months at a time. They were replaced with a revolving door of volunteer officers and soldiers who, within months of arriving, would be cycled out to the Southern front. No doubt Riggs and the Tribune were also firing a warning shot across the bow of the incoming Republican administration: expectations were high for anyone who fathered a child with a Dakota woman.

Did Riggs’ admonitions work? Your guess is probably right. In the next three posts, I supply one officer’s defense of the practice and the stories of two more who fathered children with Dakota women.