Army Officers and Dakota Women on the Minnesota Frontier, Part 3 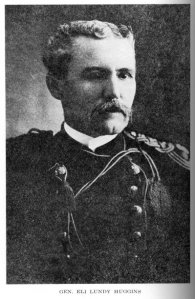 General Eli Lundy Huggins (left) and General John J. Pershing (right), whom Huggins used as an example of the practice of army officers fathering children with women native to the place where the officer was garrisoned.

In 1918, Minnesota historian William Watts Folwell was deep in conversation with General Eli Lundy Huggins. Huggins, son of Dakota missionaries Alexander and Lydia Huggins, was probably born at Lac qui Parle, Minnesota in 1842, grew up at Traverse des Sioux, about 45 miles east of Fort Ridgely, was a career officer in the army, and died in California in 1929.[1]

Folwell first wrote to Eli Huggins in 1906. If Eli’s half of the correspondence is any indication, by the time Folwell began researching the first and second volumes of the History of Minnesota –history the Huggins family had lived –Folwell valued Huggins as a source of stories from the underbelly of history, stories which never made the headlines of period newspapers: Joseph Godfrey’s flight from his Minnesota slave master; Eli’s father Alexander’s temporary insanity after inheriting money made from slavery;  rumors that John B. Renville had abandoned true love to marry his white wife, Mary Butler Renville; an explanation of the “irregular intercourse” between army officers and Native women.

On July 5, 1918, Huggins closed a letter to Folwell with this postscript:

“P.S. You quote Mr. Riggs as saying ‘irregular intercourse between white officers and gentlemen was exceedingly common.’ And he might have made a much stronger statement. I doubt whether any white healthy bachelor has ever lived among dark skinned people without taking a querida as they call them in the P. I. [Philippine Islands]. [General John J.] Pershing has a mestizo daughter (if she is still living) about 17 years old. The presence of officers and civil employees’ families was some check, and the frequent changes of station. But when a garrison was unchanged for a year or so the querida always appeared and there are [word illegible] a good many young American mestizos in the P.I.

I doubt whether one of the early pioneer traders, officers etc. was without his querida, except a few married ones and the missionaries. Even those did not always escape. Capt. Seth Eastman is a notable exception of the married officers. Hinman was the only exception I know of among the missionaries. He was the only bachelor missionary except the Pond brothers who soon married white women. It was imprudent to place a young bachelor missionary in this position and leave him there for years.

You know who Dr. [Thomas] Foster was, a pioneer newspaper man. He accompanied Gov. Ramsey and party to Traverse des Sioux when the treaty was made there. He bought from her father, Thunder Face (He-wakiyan) a Sioux maiden of more than usual charms. But when he tried to exercise his marital right, she resisted and left the marks of her nails on his face. The incident created much amusement among both the whites and Indians. She made several objections to accepting her father’s choice, one being that Dr. F. had ‘butter eyes’ –glass is the same as butter in Sioux, and F. wore large spectacles. Thunder Face laughed about it. He had delivered the goods and that was all that could be expected from him. The Dr. being a civilized gentleman could not assert his rights as his remote ancestor the cave man would have done and has for the degeneracy of our age.”

It seems Huggins knew what he was talking about.  Besides being career Army, Huggins had a relationship with a woman to whom he was not married while stationed in Alaska. We don’t know if she was Inuit, as one story implies, or if she was Russian, as implied by the name in another. We also do not know the role she played in determining the future of their son, Zenoah Alexander Huggins. But Eli Huggins, perhaps following Riggs’s admonition, played the part of the dutiful father by having Zenoah raised and educated in the Lower 48 by Eli’s sister Jane Huggins Holtzclaw.

Curiously (or perhaps not) there is no evidence Huggins ever told his own story to Folwell. As we’ll see next in the cases of two Army officers who fathered children with Dakota women in Minnesota, these relationships are not the type of stories historians preserved in the official record.

[1] The question of Eli Huggins’ birthplace is not settled. The author of a biography published in Chronicles of Oklahoma consulted Huggins’ military records in the National Archives, which may indicate he was born in Schuyler County, Illinois. This is possible as that county was the home of Eli’s maternal grandparents and a secondary source states that Lydia was visiting home at the time Eli was born. However, none of the Huggins family memoirs or journals note this trip home to Illinois. Baptism records for the Presbyterian Church at Lac qui Parle show Eli Huggins was baptized there October 30, 1842. Eli later referred to himself as “the oldest person still living who was born in Minnesota.” My thanks to Lois Glewwe for fact-checking Eli’s birth.